16 Aug Is The Writing On The Wall

August has already proven to be an eventful month. Trump started the festivities, as he did at the beginning of May, with a tweet announcing new tariffs on China. While equity markets fell on the news, traders initially began buying on the belief that markets typically don’t react to repeat news (ie, May’s correction would not play out on the same news event). However, after China let the yuan depreciate outside of its fixing band, above ¥7.0/$, markets immediately feared an escalation of the trade war into a currency war.

It now seems that yuan devaluation is not the immediate intention of Beijing. Coupled with this week’s relaxation of the new tariffs by the Trump administration (someone in the administration realized that September tariffs would crimp the Christmas season, given where most goods sold in the U.S. come from), we saw a major relief rally Tuesday. After the short-covering / relief rally on Tuesday, Wednesday morning the bond market pushed the 10-Year U.S. Treasury yield below that of the 2-Year yield. The dreaded Yield Curve Inversion. So down markets went again, with the Dow falling 800 points in Wednesday’s session.

Aside the whiplash inflicted by the algorithmic traders, where does August’s equity price action leave us? Is the bond market calling out a recession? Or is this typical low-volume, vacation-time market volatility?

We know, as most market observers, that another recession will hit, eventually, and all bull makets end. Perma Bulls have been right for a long time, but they won’t be right forever. Despite the scary equity price drops seen in August, we still don’t see evidence, yet, that “this time its different” and the correction won’t draw in new dip buyers.

In this commentary, we share briefly what we are seeing on the markets.

If anyone tuned into the financial media channels over the past day, you will know that the bond market “sent a recession signal”. The 10-Year U.S. Treasury yield traded below the 2-Year U.S. Treasury yield for the first time since 2007. This is called yield curve inversion. This scared investors because the prior four times the 10-2 curve inverted, a U.S. recession followed. As our readers know, we track the 10-2 curve regularly. This inversion has been a slow, inexorable process. Big deal? Some will note that the 90-day T-bill yield has been inverted vis-à-vis the 10-year yield since May. Others point out that the “whole” yield curve – 90-day yields to 30-year yields have NOT inverted. So, no, Wednesday’s 10-2 inversion (which saw the 10-Year yield climb back above the 2-Year yield by the market close) was less important as an economic warning sign (we have already had plenty macro warning signs) than it was as a trigger for automatic algo trading sell programs.

As we have mentioned in the past – and many commentators reiterated on Wednesday – the 10-2 yield inversion precedes recessions (shaded in grey) by 12-to-18 months. And the S&P 500 (SPY) peak precedes the start of a recession by 9-month, on average. Moreover, in a Commentary written last February (“End Of Fed Tightening. Stocks Watch Out Below!”), we studied the lag between the first Fed rate cut and the peak in the S&P 500 and found that the stock index tends to peak in the vicinity (albeit with a bit of variance) of the first Fed rate cut. Neither the 10-2 yield curve inversion, nor the perspective start of the next recession, nor the first Fed rate cut can definitively suggest that 3000 will be the ultimate top on the S&P 500.

So outside some panic from over-bought record highs, equities don’t appear to be at risk of sinking into the abyss starting this week. If history is any guide, the next recession may not hit until 2021. We throw in a BIG caveat with any historical analysis using yields today, since 11-years of central bank interest rate manipulation will certainly have an unknow affect on yield-based predictability this cycle.

Big Mo Did Not Slow

We can say that the U.S. stock indexes got ahead of themselves since the Trump election. Way ahead of themselves. Even if everything is fine in respect to the health of the economy, a garden-variety bear market (which was attempted last December) is likely still lurking. No doubt that the path higher has been more frustrating for Bulls since January 2018. But higher highs have been made on the indexes throughout 2018 and 2019.

We use the NYSE Advance-Decline Line as a reliable indicator of secular market weakness. In our chart below, we highlight the divergence of the A/D line (in blue) versus the NYSE Composite Index during 2014-2015. The equity index made new highs in 2015 while the A/D line failed to make it back to its 2014’s high level. And BOOM, many equity indexes fell into bear market territory (-20%) by early 2016. The same divergence occurred in 2007 and 2000. The fact that the A/D line confirmed the highs on the NYSE (and S&P 500) this summer suggests that market breadth (number of stocks powering the indexes higher) has not been deteriorating. Ergo, we should be expecting a correction at this stage and not a major bear market. 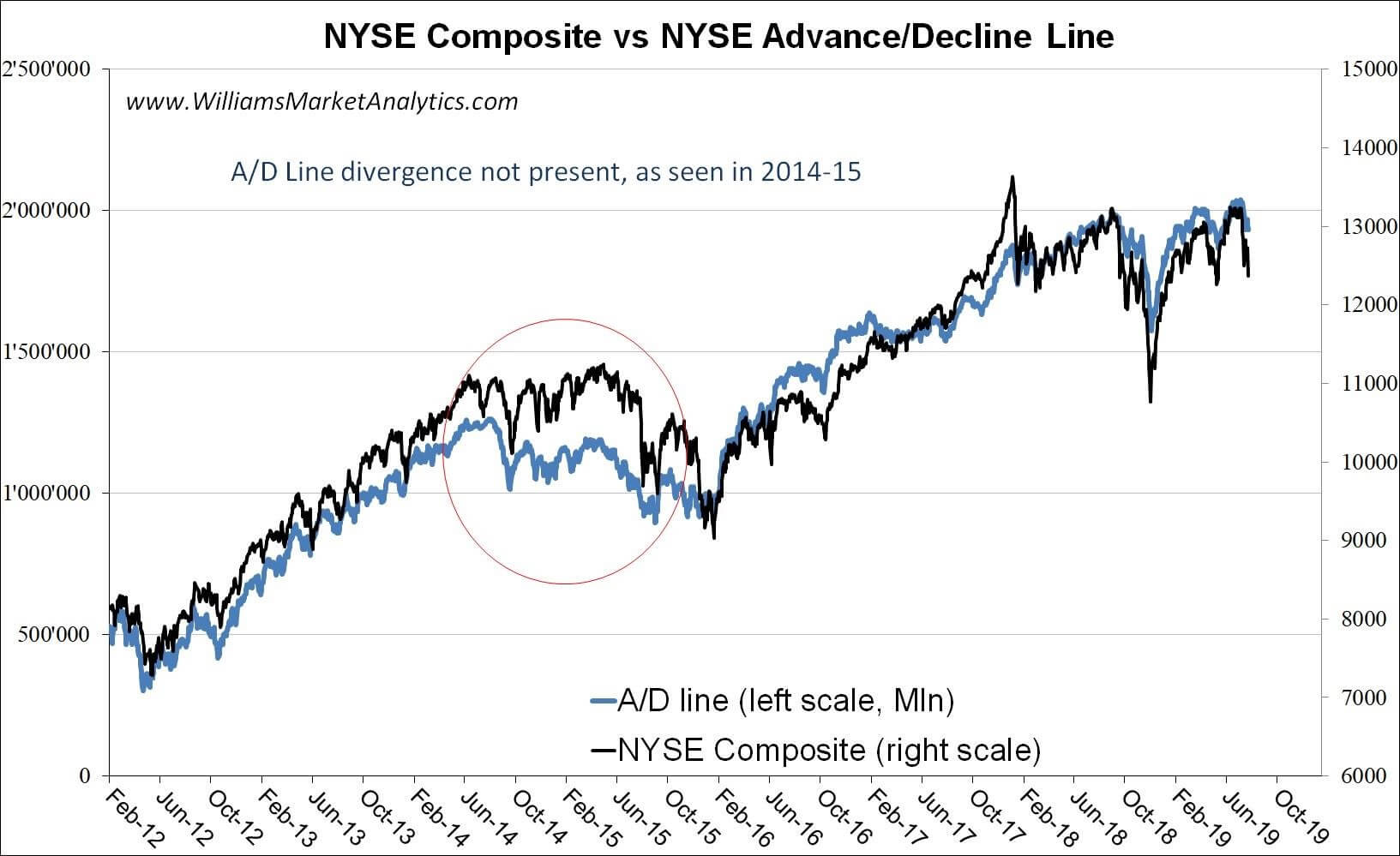 Another lesson on momentum can been gleaned from the market-leading Nasdaq-100. Given that a market top can only be known in hindsight, what we care about as money managers is not avoiding the first shoe to drop. Rather it’s avoiding the second shoe to drop (which is the shoe you want to avoid). Powerful upside momentum, with the Nasdaq-100 making new highs, does not give way to a straight shot to bear market lows. Bulls can be re-assured that there is plenty of time to get out before major portfolio losses are incurred.

In our chart below, we show that the breaks to new cycle highs in 2000 and 2007 (which proved to be the ultimate cycle highs) both saw a big bounce back after the initial descent. Of course, those first drops were nasty. But selling into the initial drop was a bad idea. Waiting for the re-test and failed second high is a better idea because investors will have more information on the state of the economy and can make a (more) informed decision to re-balance their portfolios defensively. 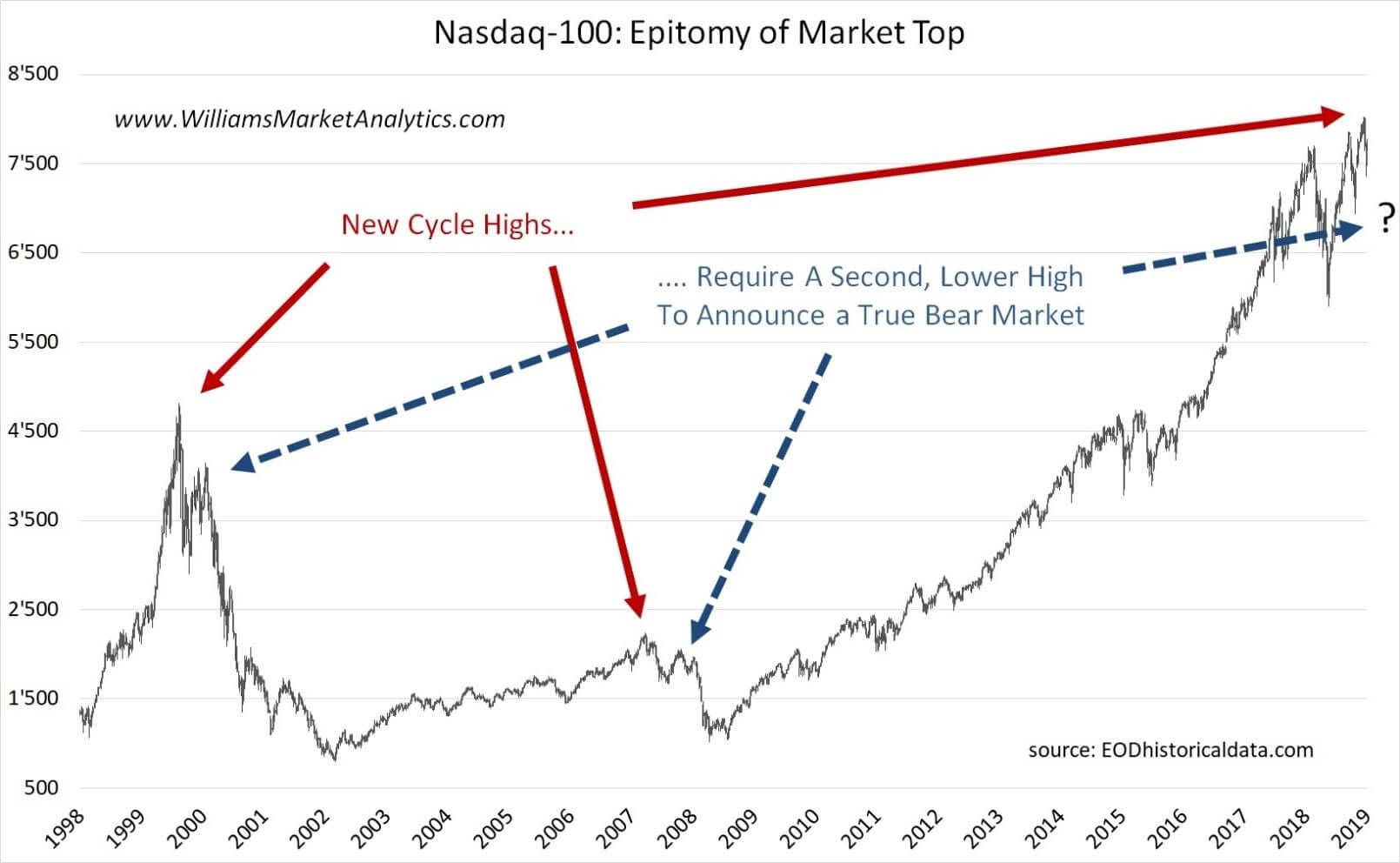 Okay, let’s admit that no one really knows what is going to happen at the end for these central bank-manipulated financial markets. The lack of historical precedent for trading in negative interest rate markets, along with flyby-the-seat-of-their pants central bankers and a mad tweeter U.S. president, has caused most investors to shift to trading off of technicals.

As the S&P 500 is the index that everyone looks at, we plotted up this index and ruminate on levels that might catch an initial drop in equities. It’s time to step back, forget the wiggles created by the algos, and take a big picture view. Here are some levels to watch. 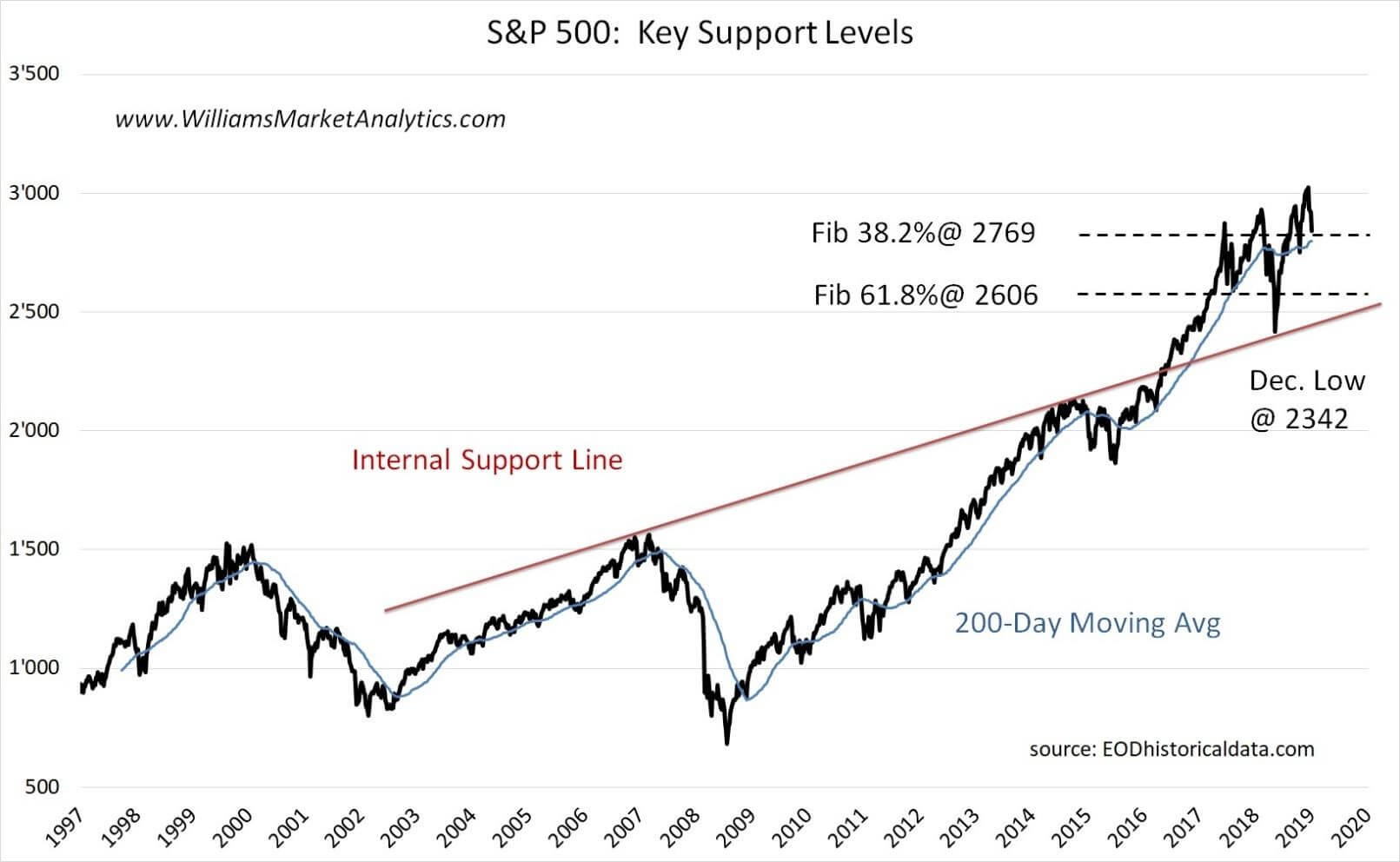 We remain cautious in our portfolios, with excessive levels of cash (50%-60%) and bond holdings in our DGR Macro Strategy. Investing (as opposed to speculating) is about staying invested, but shifting allocations between defensive and cyclical names (or in extreme cases, cash) based on changing economic and market conditions. We cannot get to bearish with world interest rates being held down (and at negative levels in many parts of the world). Investment money has to flow somewhere.

Now, more than ever, TINA (there is no alternative to equities). At 1.59%, U.S. 10-Year Notes may still get bid up higher. Hell, German 10-Year bunds are trading at being bought at -0.65%! However barring a Black Swan which brings on an economic crisis (a trade war is politically-made and easily politically solved), whatever correction that plays out in equities in the second half of 2019 will (at minimum) be a buying opportunity for a re-test bounce towards the summer 019
highs.