Between Fed rate cut giddiness and another truce in the U.S.-China trade war following the G20 summit, traders went berserk buying the large-cap indexes earlier in the week. Dow, S&P 500, and Nasdaq all hit new record highs. The Russell 2000 small cap index and S&P 400 Mid Cap indexes have lagged as Microsoft, Apple, etc are not components. With the S&P 500 now testing the 3000 level, where do we go from here? There appears to be no limit to equity buying. This now feels a bit like euphoria, as there is no reason to push indexes to records in advance of an earnings season which may not dazzle. Our WMA Sentiment Indicator is back to “Excessive Optimism”, with the highest reading since January 2018. Macro data is not great, as shown below. Bad data is welcomed by markets looking for more Fed rate cuts this year. It is absolutely perverse to bid up equities on weakening economic data. This is the world that the central bankers built for us. Swallow hard and buy or just stay out of risk assets.

This week, macro data was mixed. First, the weak jobs report for May (72,000 job creations after revisions) caused equities to rally in June as traders, in this perverse bad-news-is-good-news market, bought equities in gaming a Fed rate cut. Today’s June jobs number of 224,000 job creations provoked a knee-jerk drop in equity futures on the reduced odds of more Fed cuts this year. We just long for the days when good news for the economy is good news for equities! Get the Fed out of the markets! The unemployment rate ticked up to 3.7% as labor force participation increased.

The Institute for Supply Management said its manufacturing index slipped to 51.7 in June from 52.1 in the prior month. The index hit a 14-year peak of 60.8% last August, but it began to decline after a U.S. trade dispute with China intensified and spurred a round of tariffs by both countries. The ISM PMI has now slowed to levels last seen in 2016, implying that manufacturing is expanding at the slowest pace in recent years. On the services side, the ISM Non-Manufacturing Index slipped to 55.1 in June from 56.9 in May. This is the lowest reading since July 2017. The weaker ISM numbers undoubtedly contributed to the equity rally this week on Fed rate cut gaming.

Outlays for U.S. construction projects fell -0.8% in May at a seasonally adjusted annual rate of $1.3 trillion, the biggest drop since November. Meanwhile factory orders in May fell -0.7%, in-line with expectations. More evidence of a gentle slowing of the U.S. economy.

More important than macro data in the coming weeks will be the Q2 earnings reporting season. Earnings are expected to slow, but it remains to be seen to what extent this is priced into the S&P 500.

Right now, putting new money in U.S. equity indexes with a long-term, multi-year holding period would seem to be a massive portfolio allocation error. Despite the wide swings in U.S. equity indexes since January 2018, U.S. stocks have still done better than global stocks. However to make money, traders have needed to nimbly trade around the volatile uptrend. Buying S&P 500 stocks after a price dip then taking profits after a short rally is not easy and certainly not a source of consistent portfolio returns. Bad “in-and-outs” are inevitable, and net performance from trading around the trend often does not outperform just holding the benchmark indexes.

The big equity portfolio money is made by buying and holding onto stocks in a secular uptrend. Research by academics has shown that the main drivers of portfolio returns are (1) the asset allocation decision and (2) sector selection. The most winning portfolios today are owned by investors which bought U.S. index stocks in 2009 and went about their business, leaving their portfolios untouched. In this article, we look at secular outperformance of U.S. stocks relative to global stocks and suggest that a major portfolio allocation choice may be at hand. 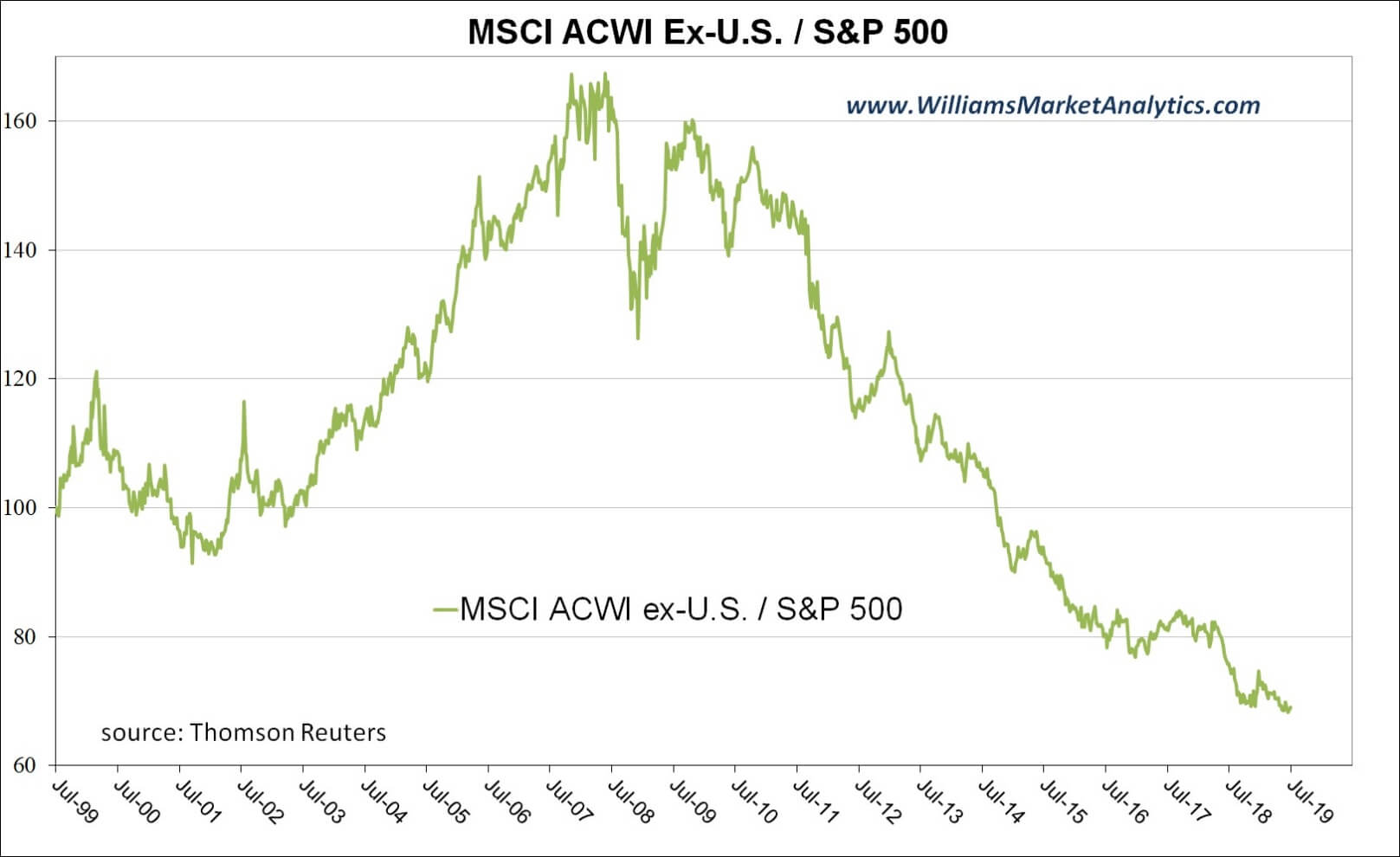 Outperform of U.S. stocks from 2009 to present has been due to several things: 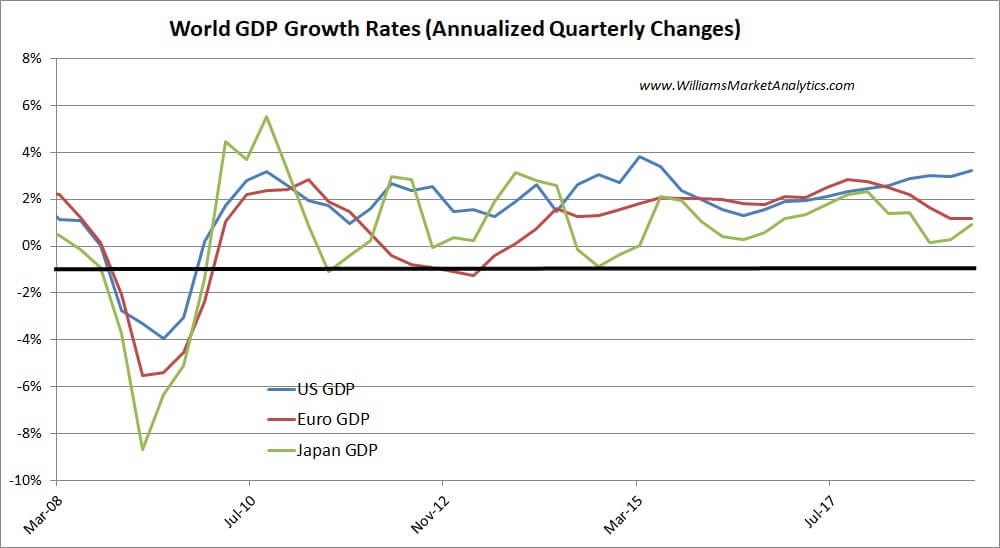 So that is the past. All these factors are priced into the relative outperformance of the S&P 500 over the past 10 years. Going forward, can we expect that “this time is different” and relative U.S. compared to global stocks will be permanent? Not likely. It may take the next recession to inverse the relative performance trends (like in 2000 and 2008), with a shift in relative GDP growth rates. But eventually valuation differentials will drive a rotation out of expensive U.S. stocks into cheap emerging and other developed nation stocks.

The table below shows current Price/Earnings ratios by national stock markets, ranked from cheap to most expensive. The U.S. is one of the most expensive companies by P/E.

The cyclically-adjusted P/E (CAPE), or Shiller P/E, also suggests that U.S. stocks have reached relative extreme valuations compared to global peers. At 31, the S&P 500 Shiller P/E is above the 15-year average of 25, and nearly twice a long-term average of 16.8 that goes back to 1881. The only other times it has topped 30 occurred in 1929, before the Great Depression, and between 1997 and 2002, during the dot-com bubble.

Looking forward, the MSCI ACWI Ex-U.S. P/E is estimated at 12.8x. The forward P/E for the S&P 500 is about 17.5x. The chart below, borrowed from Yardeni, looks messed up prior to 2008, but we are only interested in this cycle And we see clearly the valuation divergence between U.S. and global stocks. 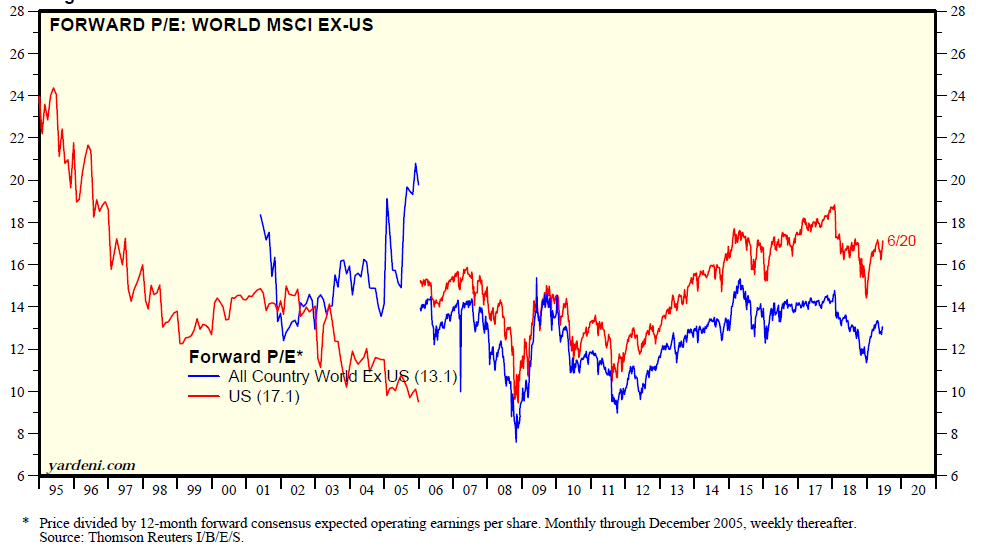 We have launched a MSCI ACWI Ex-U.S. Top Picks portfolio to focus on global companies with the best prospects. We are not saying that companies with good prospects and great valuations don’t exist in the U.S. (we still believe in our U.S. Top Picks portfolio). We are saying that going forward investors need to be much more careful in picking U.S. companies (avoiding the big U.S. index stocks) while great opportunities will be more abundant among global companies.

It has been a great ride for those with the intestinal fortitude to stay in U.S. index stocks. It still may be precocious to call the end of the relative U.S. out-performance run, and as mentioned, this may require going through the next recession. Our prediction is that global stocks will hold up better in the next recession (perhaps in 2020) and then emerge as market leaders in the next expansion. For those still holding a majority of portfolios in U.S. stocks, it may be time to slowly begin rotating into global stocks.